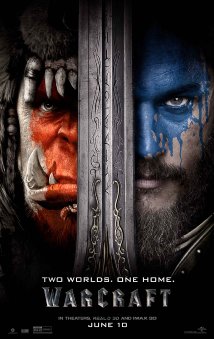 But the movie Warcraft makes a strong case for equity and inclusion…even if the people to be included are big, green, and have a predilection for war.

“We’re orc,” the honorable chieftain says to the humans who will become their allies. “War solves everything.”

Despite that belief, orcs value the same things we do. They care for their families (there’s nothing cuter than a baby orc growling and baring its tusks), they want a sustainable world, and they’re big softies when it comes to love and honor.

From the first minutes of the movie, which feature orchestral music heavy on war-like drum beats, moviegoers know big action is afoot. Imdb.com describes the plot succinctly: “As an orc horde invades the realm of Azeroth, a few human heroes and dissenting orcs must attempt to stop the true evil behind this war.”

The film – directed by Duncan Jones and written by Jones and Charles Leavitt – addresses familiar themes, such as “power corrupts.” You don’t have to know anything about the video game World of Warcraft, on which the movie was based, to enjoy this classic story of the hero’s journey and good versus evil.

The orc and human protagonists’ paths mirror each other. They must make difficult decisions that will cost lives. The human hero must help his king defend their world from the invading orcs who are fleeing their destroyed homeland. Both sides have a powerful magician with good intentions to protect his people.

I wasn’t sure how well I’d handle having to look at orcs for two hours. They’re so…ugly and green. And how do they talk with those tusks sticking out of their mouths?

But I needn’t have worried. Interesting, well-developed characters and fast pacing hold moviegoers’ attention. The story features smart women and a female half-orc* who strives to demonstrate her value to a tribe that treats her like a second-class citizen. There’s even a cameo by an Academy Award-nominated actress.

“I actually enjoyed that,” I said as the credits rolled. My girlfriends agreed.

The only reason I went was to return a favor to a friend who had cheerfully accompanied me recently to the romantic cry-fest Me Before You. Misgivings ensued when I checked on Warcraft seat availability two days prior, and learned that no tickets had been sold. Egads!

Then I saw Chris Nashawaty of Entertainment Weekly had given Warcraft a “D.” He said watching it was “like being bludgeoned on the head with a Dungeons & Dragons Monster Manual for 123 minutes.” This was both hilarious and sobering. I’m throwing away money, I thought. Oh, well, it’s only $5.50.

But upon arriving at the theater, the movie was almost sold out and we were forced to sit in the second row, which wasn’t that bad. And afterward, I read Manohla Dargis’ review in The New York Times, which offered this compliment: “…Duncan Jones, the director who, against the odds, has mined a watchable movie out of an entertainment franchise that started with a video game.”

I agree. Warcraft succeeded in entertaining us. The film contains messages of hope, love, cooperation, and having compassion for people (or creatures) who don’t look like you. In a world that’s increasingly marred by violence, you’d think most people would welcome a story featuring these themes.

Equality for female half-orcs? Check. A human world that has enough room to include orcs? Maybe. The filmmakers left a few loose strings, indicating a sequel might be in the works.

Why not? I wasn’t bored once.
___
* As a newbie to the Warcraft universe, I thought the character of Garona was half-human/half-orc. Thanks to Gonzalo for pointing out she’s half-dranei/half-orc. Apparently there’s a debate about this, as you can see if you Google “Garona half human.”

Katherine Valdez’s new motto is “Orcs are people, too!” Before watching this film, everything she knew about the video game World of Warcraft she learned from watching South Park and The Big Bang Theory.