Think twice about taking your kids to see The Secret Life of Pets. Here’s why. 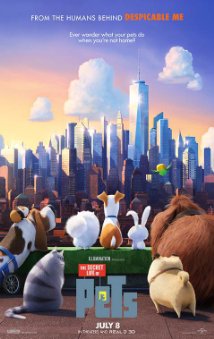 I hadn’t planned to watch The Secret Life of Pets. But the promising trailer and enthusiasm of many dog-owner friends convinced me to check it out.

On the surface, it’s a heart-warming film about love, friendship, and belonging. The life of Max – a terrier who loves his owner, Katie – is turned upside down when she takes in a stray named Duke. A series of unfortunate events leads to them to the streets, dodging animal control and trying to defend themselves against the street-wise castoff pets living in the sewers.

This tough gang of animals is led by a homicidal maniac in the form of a cute-and-fuzzy white bunny, voiced by Kevin Hart, who steals the movie as Snowball.

The plot and characters kept the audience laughing throughout the movie. I also appreciated the message against irresponsible pet owners and “flushable pets,” e.g. animals such as rabbits purchased at Easter, then later abandoned.

But after talking with one friend who deemed the movie “Not as good as I thought it would be,” and another who pointed out the racist undertones and disturbing subplot of the throwaway pets’ revolution and plans to kill humans, I decided further analysis was warranted. Here’s what I found.

An essay by Jason Johnson at TheRoot.com (“What The Secret Life of Pets Gets Wrong About Black Power and White Privilege”) offers a thoughtful review of the film’s shortcomings, starting with the sub-headline: “Rejected pets cry out ‘Revolution forever, domestication never’ in this jokey version of the black power movement.”

“What is probably most jarring in the movie is the sloppy black militant allegory of Snowball and his Flushed Pets movement,” Johnson says. “…Snowball goes into a long political rift about how humans (i.e., “white people”) oppress animals. They use pets however they want, then flush them, or throw them away, once they’re done…And if there were any question about what cultural movement was being alluded to, the moment Snowball starting talking, Max and Duke begin “code-switching” into black vernacular to respond to him. It made me cringe.”

Common Sense Media points out, “Animals discuss killing people (one anti-human animal character is impressed when others claim to have offed their former owner and detail how they did it)” but ultimately summarize the movie as “clever and engaging, despite animals in peril” and deem it appropriate for ages 6 and up.

Some parents disagreed. In a comment titled “Queasy Feelings Throughout,” one said, “There were funny parts…but there were dark parts, too. If I had smaller kids younger than 10 or so, I wouldn’t be seeing this movie. My 11-year-old daughter told me she thought it was ‘too dark for little kids’ as we were leaving the theater.”

Another parent wrote, “Surprised the writers have kids – they clearly have different sensibilities than I do…My wife and I quite often find ourselves looking at each other in disbelief during kids’ movies…During the conversation between the two lead characters and this “gang” of castaways, the subject of killing one’s owner comes up. Yes, that’s right, the pets talk about murdering their owners…”

Pets murdering their owners. This is what passes for wholesome family entertainment in the 21st century?

If you do take your children to see The Secret Life of Pets, be prepared to discuss it with them afterward. And then ask your friends for the name of a good therapist. Your kids may need one.

Katherine Valdez loves her four plants and is reasonably sure they’re not plotting to murder her.